To understand what a competitor is likely to do, put yourself in their shoes. That’s the core idea of wargaming, a framework for setting strategy that dates back at least to Frederick the Great. Using a variety of approaches that range from thought experiments to computer modeling, teams answer the question, “if I had the competitor’s challenges and constraints, how would I go about winning?”

The Role of Wargaming in Your Competitive Intelligence Practice

When you play the role of a competitor, your focus on winning from their point of view helps you avoid underestimating their chances of success. That can be an excellent approach to refine a strategy, and this added perspective can be immensely helpful to validate planning around a product launch or a series of product investments, for example.

Participants should have some experience with other competitive intelligence frameworks, such as Porter’s Five Forces and Four Corners Analysis. More important still, the team should have an intimate understanding of the competitors, in terms of both quantitative measures such as market share and growth, as well as qualitative ones such as corporate culture and motivation.

During the wargaming exercise itself, participants are put in a pressure cooker, and some attention should be paid to the fact that they are being asked to play a “devil’s advocate” role, hypothetically attacking their own real-world interests. The first step in the process actually benefits from that fact, as the team analyzes the landscape and perfects a series of moves your company will take to elicit a reaction from competitors.

In the next stage, participants test the plans they have put in place, attempting to countermand them in the hypothetical role of a competitor, possibly using computer models to put scenarios to the test. Finally, the team goes back and revisits the planning stage, refining the initial plan to better anticipate the responses made by competitors.

What Your Organization Should Take Away from the Experience

The goal of wargaming is not to predict the future. It’s to more fully understand the competition and the options that are open to them in response to actions that your company might take. Like most competitive intelligence activities, it’s about raising your odds of success. In that sense, the primary goal of wargaming is to prepare for more eventualities, in terms of what your competitor might do, looking ahead several moves as one might in a game of chess.

A common and valuable outcome to a wargaming exercise is to say, “I never thought the competitor would do that, but it’s really their most rational course of action.” Doing so brings you a little bit closer to having the oft-mentioned “20/20 hindsight” when it can actually help you—while it’s still actually foresight. 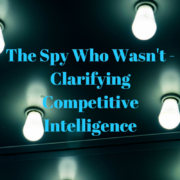 Qual: There’s An App For That